Get fresh music recommendations delivered to your inbox every Friday.
We've updated our Terms of Use. You can review the changes here.

by Matt Hopper & The Roman Candles 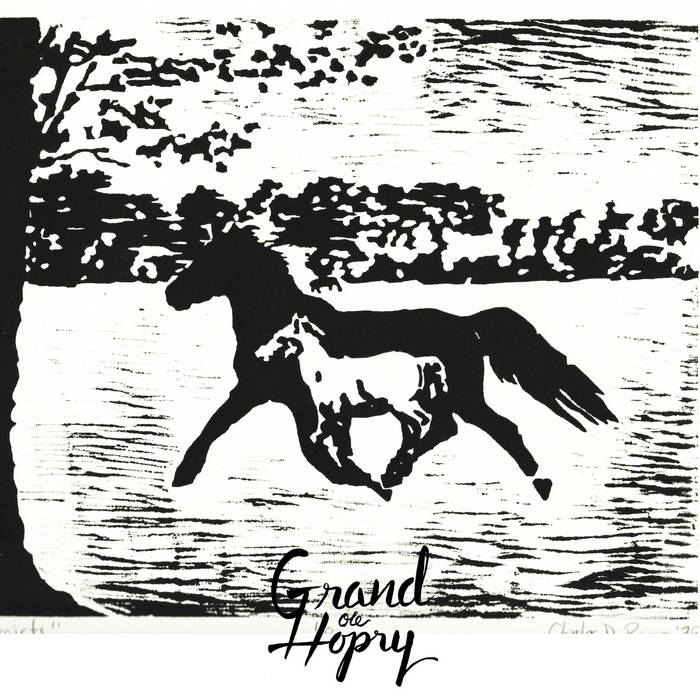 Wasilla, Alaska - Matt Hopper had a pretty clear idea of what he wanted for his 11th album, where he wanted to do it, how he wanted to do it, he even knew the name of the album before laying down the first note. But as the saying goes, “the best laid plans of mice and men often go awry”.
“Grand Ole Hopry” had a clear focus - it was supposed to be Hopper’s quintessential country album - but as a musician with a foot firmly planted in rock and roll, blues, and folk music - the finished product outgrew it’s tidy mission and now sits in that bigger catch-all known as “Americana” music. Some of these songs simply couldn’t help jumping out of the speakers. Despite flourishes of pedal steel and violin, quite a few of the jams rock a little too hard to be considered country music.
Hopper began the process of gathering the 12 songs for the album in 2012 after recording a Kris Kristofferson song with Boise based bluegrass band Reilly Coyote for a tribute album that was released on PIAPTK Records. When he presented to the group his idea for the ambitious album project, which included a tour to Nashville to record the album, the somewhat established local musicians wouldn’t commit, forcing Hopper to put the entire project on hold. It would be two years before he revisited the idea, instead recording and releasing two more rock based albums “Husky” and “High Hopes” in 2013.
In the winter of 2014, he assembled a band that would make Grand Ole Hopry a reality, featuring Bryan Daste on pedal steel, Jon Fust on drums, and Bryan Garfinkel on bass. The goal was to perform the songs on the album every night on a tour from Boise, ID to Nashville, TN and then cut the album live to tape in an all analog studio. They arrived in Nashville in early March 2014 to record; but many issues arose with the studio where they were supposed to cut the album and after spending only three hours there, the group decided to pull out.
With a 10 day block of time set aside to record the album in the middle of the tour and nowhere to record it, the album seemed heading for another crash and burn. But as luck would have it, Garfinkel had packed all his home recording gear in a trailer he was hauling across the country and their gracious host, fashion consultant and blogger Milton White, agreed to let them take over his entire house in Germantown to cut the tracks.
Soon there was a pedal steel in the kitchen, a drum kit in the living room, and amps in the bathrooms and the “Exile on Main Street” style sessions began. Over the course of the next week the basic tracks were laid down and special guests Jamie Timm (guitar), Tim Easton (harmonica, mandolin, vocals and organ), Angela Oudean (violin), and Nelson Kempf & Keely Boyle (vocals) shuffled through laying down parts and hanging out. Garfinkel, who had engineered Hopper’s “Husky” took control in the middle of the house recording the album with assistance from Daste, also a skilled engineer from Portland, OR.
As a fan of hip-hop culture’s willingness to showcase homies on each others’ records, Hopper reached out to a bevy of his favorite singers and Samantha Crain, Freddie Stevenson, Julia Haltigan, Jaime Wyatt, Leslie Stevens, Jodi James, Steven Wilson, Tracey Holland and Riana Riggs all sang on it along with Easton, Daste, Kempf and Boyle.
Upon their return to Boise, the album was showcased live at Treefort Music Festival and then Hopper left the U.S.A. for an extended three month solo tour of Europe, six weeks on the east coast and a six week Alaskan tour. He began digging in on mixing over the winter of 2014-15 with trips to Tiny Telephone in San Francisco with Rob Shelton mixing a couple songs, and a trip to Flying Blanket in Mesa, AZ where Bob Hoag mixed a few. The rest of the mixing was handled by Garfinkel, Hopper and Daste in Portland, OR. The mastering was performed by Chris Parks at Tonic Room in Boise, ID.
While reading “Shakey” an autobiography on Neil Young and simultaneously listening to his entire catalog as he moved through the years, Hopper found it amusing how Young would decide on artwork for his records. While he was in Portland in singer Rianna Riggs’ bathroom he looked over and noticed a wood cut on the wall that her father had done in 1979 and immediately felt the artwork fit the vibe of the record. A few weeks later, driving down Grand Ave in Phoenix, he noticed a large mural that said “Ain’t Life Grand” and he knew that this was THEE photo opportunity for the album and immediately pulled over and had his friend Josh Hart snap the shot that you see on the back cover.
If you count some early works, pre-Roman Candles, this is Matt Hopper’s 11th release and will come out on 11/11/2015 after years and years of false starts, let downs and best laid plans gone awry. It features some of his favorite up and coming singers, pedal steel and fiddle in a grand attempt at making a Nashville-style album...ladies and gentlemen, we present to you, Grand Ole Hopry.

Bandcamp Daily  your guide to the world of Bandcamp